I have a confession to make. When I first unpacked my new AeroPress I had no idea what the weird shaped hollow thing in the box was. Turns out it’s a funnel. But it took me quite a while to figure that out.

I mean. If you look at it, at first glance it doesn’t really look like a funnel. And to be honest you don’t really need it. Or at least that’s what I thought. But since the first time I used it, I’ve never looked back. I use it all the time now.

Part of the mystery which surrounds the AeroPress tunnel comes from the fact that it isn’t included in AeroPress’s own instruction manual.

If you open the booklet which comes with your coffee maker it isn’t mentioned at all. Which is a bit weird. AeroPress denying their own funnel? Whatever, let’s look at what it is and what you use it for.

What is AeroPress funnel for?

The AeroPress funnel has two functions. The first, unsurprisingly, is to ensure you can pour coffee into the chamber of the AeroPress without spilling any. But you can also use it to funnel your brewed coffee into an espresso cup or small mug.

How to use the AeroPress funnel

It’s really no mystery to it and it’s quite easy to use the funnel. As you can see from the image above the funnel fits snuggly onto the chamber of the AeroPress. The wide mouth of the funnel ensures the coffee grounds all flow smoothly and neatly into the chamber ready for the hot water to be poured in.

You can leave the funnel in place while you add the water and that’s a good way to make sure you don’t run the risk of spilling hot water.

As we mentioned earlier you can also use the funnel to pour coffee into a small cup or receptacle such as an espresso glass.

Do I need to use the AeroPress funnel?

To be honest, no you don’t really need to use the funnel when you make an AeroPress coffee. I didn’t use it for weeks until I realised what it was for. You can choose to simply pour the coffee out of the spoon into the chamber of the AeroPress.

However, I do have to admit it is far easier to use the funnel. If you do so there’s no chance of you making a mess and spilling your coffee beans all over the place.

And, as we mentioned, the funnel makes it easier to decant hot water into the chamber of the AeroPress. So, no risk of a nasty burn. Which to my way of thinking is a good enough reason to always use the AeroPress funnel?

What else can I use the AeroPress funnel for?

Well, it’s a funnel. So, it’s a useful little tool to have in the kitchen. It’s surprising how often you use a funnel once you have one. Use it to:

Pour rice from a bag into a container.
Transfer coffee beans from a packet to a tin.
Transfer bulk liquids and grains into smaller containers.
Pour salt, pepper, seeds, and species from larger containers into jars.
Transfer loose tea from packet to caddy.

The list goes on. Suffice to say the AeroPress funnel is a versatile little device. Even if no-one has a clue what it is when they first see it. 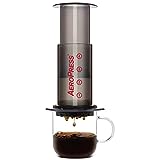 How to froth milk on a stove – do you need a milk frother?