What is a portable milk frother wand? I must admit I was stumped for a few minutes. A reader had emailed me asking which portable milk frother wand I would recommend? Wand? What on earth is a milk frother wand? Thankfully, the mist soon cleared and I realised the reader was asking, in a slightly different way, which handheld milk frother I’d recommend.

To clarify. A portable milk frother wand is just another name for a handheld milk frother and not to be confused with the steam wand which can be found on barista style coffee machines. A handheld frother in appearance is very similar to a small handheld kitchen whisk and is often battery powered for quick and convenient milk frothing. They are very powerful and will create a rich textured foam in around 30 seconds which you can use for latte, cappuccino and many other frothy coffees.

If you’re into making coffee, then you’ll probably have noticed the vast amount of equipment you can buy to help you create the perfect drink. There’s so much that sometimes it can feel dizzying and when you hear of another type of device for frothing milk, your head might begin hurting. So, what is a portable milk frother wand?

If you’ve been thinking about buying a tool for creating delicious, foamed milk then this might be one of the contenders. In this guide, we’ll introduce you to this type of milk frother giving you everything you need to know to figure out if it’s the right tool for you which you can find below the table of our recommended handheld milk frothers (or frother wands).

How does a portable milk frother wand work?

As we’ve already said a wand is another name for a handheld milk frother. It’s also known as a coffee whisk. But whatever you call it the device is a compact tool that is powered by batteries. Some handheld milk frothers come with a handy USB charging feature, so you’ll never be without power. However, it has to be said these models aren’t as popular as the traditional battery powered frothers.

But USB or battery the way they work is incredibly simple. You pop the frother into your milk and turn it on, moving in slow rotations until you reach the desired consistency. The little whisk head is very powerful and will turn your milk from liquid to foam in around 30 – 40 seconds.

What do you use a frother wand for?

One of the major benefits of the portable milk frother wand is how affordable it is. But even better is that for this cheap price, you’re also getting a tool that’s beautifully versatile.

For coffee lovers, the handheld milk frother is a must as it allows you to make everything from hot, foamy cappuccinos to frothy iced coffee and everything in between. Latte and hot chocolate both require foamed milk and your portable frother wand will allow you to create this quickly and efficiently.

But did you know that your portable milk frother can do much more than just help you create barista style coffee at home? These handy little tools are ideal for whipping cream, protein shakes and dips. Many people also use them for making cocktails and there are some that go as far as using their portable milk frother for whisking eggs!

How is a portable milk frother wand different from a steam wand?

When you go to a cafe, you will notice that the baristas use large coffee machines with a whole host of accessories and attachments. One thing you’ll likely have noticed is the steam wand on the side of the machine which dreams the milk; these are imperative for baristas to make a variety of drinks. You’ll normally see them being used instead of a handheld milk frother. So, are they the same thing?

Well, not quite. While both tools do create frothed milk, a steam wand is a little more advanced and versatile. You see, these tools are primarily designed to make steamed milk which has far less texture than frothed milk. However, when you point the container with the milk at just the right angle, a steam wand is also capable of producing foamed milk.

For this reason, and for convenience and speed, professionals almost always use their steam wands. That said, it’s not necessary to have a steam wand at home, mostly because they are always attached to an espresso machine which can be very costly, especially when you compare it to the price of a handheld milk frother.

You should also consider the fact that a steam wand does not allow you to produce cold frothed milk whereas a portable milk frother wand does. You’ll also be able to take your handheld frother on the go (even camping) but just try lugging a huge espresso machine on vacation with you!

Is it worth getting a milk frother?

As we mentioned earlier, there are so many different pieces of equipment to buy when making coffee at home so you might think that investing in a milk frother is a waste of money. But the good news is that you won’t need to invest a lot so you could say it was a wise purchase.

These tools usually only cost between £5 and £15, so they won’t break the bank. Even if you only use it occasionally, it’s still worth it. Though if are thinking about buying a frother go for something like the Bonsenkitchen or Zulay Milk Boss. 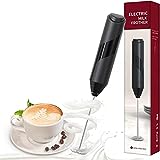 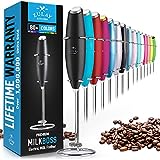 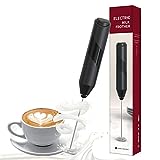 If you love experimenting with different types of coffee but don’t want to fork out the hundreds of pounds you would need for a barista style coffee machine, then a handheld milk frother is a great choice.

It’ll open a world of choices when it comes to types of drink and what’s more, it’s so easy to use. You won’t need to get to grips with any complicated equipment which is the case when using an espresso machine.

A portable milk frother wand is low maintenance and easy to clean. There won’t be a huge amount of kitchen work to do after you’ve enjoyed your coffee so what is there to lose?

A portable milk frother wand is a handheld device that allows you to create foamed milk quickly and conveniently for use in a variety of drinks. These versatile little tools can be used for other applications and yet are super affordable.

If you’re looking for an easy-to-use tool that’s compact and easy to store, look no further than the portable milk frother wand! What is a cold brew coffee maker?

Who cares about calories in hot chocolate?