A milk frother will revolutionise how you enjoy coffee at home. With a milk frother you’ll make rich, thick foam to create coffee shop quality lattes and cappuccinos in your own kitchen at a fraction of the cost and time spent waiting in line. Use a milk frother once and you’ll never go back to boring flat milk again.

Will a milk frother improve my coffee?

Does cream improve strawberries? Does pizza improve beer? I could go on but I’ll probably quickly lose the thread of what I’m trying to say.

The point here is that if you use a milk frother you will take your coffee to a whole new level. Don’t believe me?

The reason I began this blog was because I was so impressed when I first used a milk frother. But none of my friends had ever heard of milk frothers, never mind knew what they did. I needed to spread the word.

Take it from the voice of experience. A milk frother will definitely improve your coffee. It’ll also save you plenty of pennies you would otherwise spend in high street franchises chasing that perfect creamy latte.

How does a milk frother work?

A milk frother – whether it’s a handheld or electric frother – works like a whisk. The basic difference between the two types is that with a handheld frother you heat the milk separately before you use the frother to create foam. An electric device on the other hand heats and foams the milk simultaneously.

A frother turns your flat milk into a warm, thick foam. The act of frothing makes the milk slightly sweeter too so foamed milk really does elevate your coffee.

Which coffees can I make with a milk frother?

There’s really no limits. You can make all kinds of Italian frothy coffees and, even though it sounds counter intuitive, you can even make a flat white with a milk frother.

But, most of us, and certainly I count myself in this number, will be mainly using a milk frother to make lattes, cappuccino and other foamy delights.

You can see more on our milk frother recipes page.

Using a coffee maker with a milk frother

When you use a frother with a coffee maker you really have two options:

1 – Use a standalone coffee maker and milk frother.
2 – Use a coffee machine with a built-in milk frother or steam wand.

My preferred option is to use standalone coffee makers and frothers. But let’s look at both options so you can decide which will work best for you.

I like having a separate coffee maker and milk frother. This is a personal thing but I just like the versatility of this arrangement. It’s also cheaper than buying a coffee maker with a built-in steam wand.

My combination of choice is an AeroPress coffee maker. and a Zulay Milk Boss milk frother.. Purchased together they cost around £45 ($56). Which is great value for money. If you’re unfamiliar with these products you can read our reviews:

Of course you could also use an electric milk frother. The advantage here is that you can heat your milk and foam it at the same time.

You can also use your standalone milk frother with an espresso maker, a capsule machine, or even a filter (drip) coffee machine. Whichever coffee maker you decide upon a milk frother will definitely improve the coffee you make.

Let’s look at our second option:

There are two main types of coffee maker here. The first is a barista style machine with a steam wand but there are also capsule machines which have an integral milk frother.

Barista style machines vary widely from very basic espresso machines up to the more elaborate barista machines which not only include a steam wand (frother) but also a grinder, tamper, cup warmers and all manner of extras.

These coffee makers range from around £70 for the very basic models to northwards of £2000 at the upper level. But paying in the region of £500 will get you a fantastic bean-to-coffee machine. You’ll be emulating the baristas in Starbucks before you know it.

If you prefer a less manual approach to making your coffee a capsule machine such as the Nespresso Citiz will be the answer for you.

You can buy an incredible range of capsules with every flavour and type of coffee imaginable. But these machines also have an attached milk frother which allows you to add an extra dimension to an already lovely tasting coffee.

The good news here is that these machines cost from around £130 to £300 so are more affordable than a barista machine and are much easier to use.

Which is the best milk frother to use with coffee?

It depends what kind of coffee person you are. If you like the hands off approach an electric milk frother will be the one for you. You just pour in the milk, flick a switch, and the device will heat and froth your milk for you. Easy peasey.

If, on the other hand, you like to get involved in the process; you like to grind your own beans, tamper them down, and generally get down and dirty with the coffee – a barista machine with a built-in steam wand will be the best for you.

But, if your budget doesn’t stretch that far – and as we discussed earlier those types of coffee machine can get very expensive – I would suggest you use a handheld milk frother.

This is the type of milk frother I use regularly and I would recommend the Zulay Milk Boss if you choose to go down this route.

Can I use a milk frother with instant coffee?

You certainly can. We’ve written this article to explain more ‘Can I use a milk frother with instant coffee?‘ – but try your milk frother the next time you have instant coffee. Make your cup of coffee as usual but only fill the cup half way with hot water.

Then take your milk and froth it with your milk frother for 30 seconds. You’ll then have lovely warm foam which will make the best cup of instant coffee you’ve ever had. 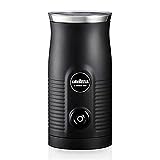 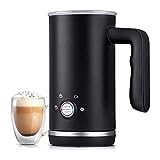 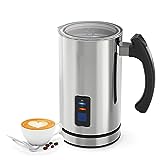 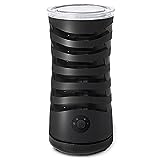 Do frothers heat milk? Some do but some don’t. If you want the full answer read our article.