The DeLonghi Magnifica ESAM4200 coffee maker is often described as the perfect device for anyone looking to take the big jump from buying coffees to making coffee in their home – it is certainly in our top 10 coffee machines list.

Often called a ‘bean-to-cup’ machine, this coffee maker is perfect at producing authentic coffees and is one of the closest barista style coffee machines you can buy in the UK today. And, despite having a myriad of settings which will allow you to get the perfect cup every time (and to your personal tastes), it still remains easy to use.

So what can you make with the DeLonghi Magnifica? Well, a lot actually. It comes with all the required attachments (which are mostly integrated) to produce anything from rich single shots of espresso through to the more more mild, milky coffees like cappuccinos and lattes. It even has a feature which allows you to make one or two cups at anytime (more on this later).

Now we have a brief of idea of what we can make with this DeLonghi coffee maker, lets take a look at the gadgets which power this machine and make it truly remarkable. Where would our cappuccinos be without one! Rather Impressively, this Delonghi coffee maker features a traditional milk frother. This means the milk is frothed and heated simultaneously by using hot steam. This is exactly the same way Baristas prepare the milk in our favourite coffee shops.

Because you’re manually steaming the milk you can adjust the steam pressure, allowing you get exact control over the temperature of your milk and how much foam you produce. This is particularity useful, if like me, you prefer a dense foam on your cappuccino but not so heavy is becomes like a solid lid. It also means you can adjust how hot the overall coffee is when you serve it, because the milk makes up the majority of the drink too much cool milk creates a luke-warm drink – which I personally do not like. The DeLonghi Magnifica ESAM4200 wouldn’t be an all-in-one machine without a decent grinder. The top loaded grinder has a setting which will allow you to ‘fine tune’ your coffee, inside the grinder there is  an easily accessible dial. Simply turn the dial to adjust how coarse the coffee is ground. This  allows you to have an adjust the flavour of the coffee produced. For example, typically you’ll find that a finer ground coffee will produce a much stronger tasting coffee.

This is basically because of the increased surface area produced by the finer grind as more of the bean is ‘exposed’ to the hot water, resulting in more water permeation and more flavour is extracted – hence producing a much stronger coffee. So, if you’re new to home brewed coffee you may want to start off on coarser grind setting as really strong coffee is something of an acquired taste.

The coffee is also freshly ground for every serving prepared so you won’t get that slightly sour/bitter taste you get from percolated coffee where the beans are used lots of times. The quantity of coffee ground and dispensed can also be adjusted. Currently you can program the machine to deliver between 7 and 11 grams. A nice touch which, again, allows for greater fine tuning of the taste of the coffee produced.

One of the features of delonghi coffee machines is the Thermoblock heating unit. This is essentially boiler which sits inside the machine. However unlike typical boilers it only heats enough water for each serving. This has several distinct advantages over units that heat a full ‘tank’ of water. The first is that it is typically much faster for the machine to heat up; and because your typically heating less water this also makes it more energy efficient. The second advantage is that the machine has a much more accurate control of the temperature of the water delivered. This is critical when brewing coffee because water that is too hot can actually burn the coffee grounds and give your coffee an overly bitter taste.

Review continues below this…

This weeks most popular coffee makers 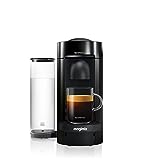 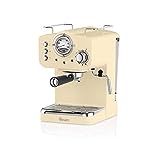 Think of the DeLonghi Magnifica brewing unit as a mini Barista inside your coffee maker! It effectively does all of the ground work for creating the coffee from pre-brewing, warm-up to tamping the coffee grounds and flavour extraction. With so much going on it is important that this part is kept clean. Luckily Delonghi seem to have thought of this by making it easily removable for cleaning. It also features a nifty feature where the coffee machine cleans it every time you turn the machine on or off by running water through to remove left over grounds and, I guess, some of the oil residue from the coffee grounds (yes, coffee beans do contain oil!). Outside of the coffee preparation the DeLonghi Magnifica also has some nice touches that are sure to come in handy. Most notable of which is the auto-shut off facility. Because this device uses steam, and therefore pressure, to prepare coffee and froth milk it is essential to make sure the unit it turned off after use. The auto-shut off feature makes sure the coffee maker is switched off after a pre-set amount of time has passed.

The coffee dispenser assembly can be adjusted allowing you to fit virtually any kind of standard coffee cups/glasses in the machine from tall latte glasses to small espresso shot-cups.

One final useful features is the positioning of the water and ground coffee reservoirs. Conveniently that are both located at the front of the machine for easy access for both refilling and cleaning. The water tank itself can also hold up-to a whopping 1.8 litres of water – enough for plenty cups of coffee!

Use Either Coffee Beans Or Ground Coffee

Despite falling under the bean-to-cup naming convention (more on this below) the DeLonghi Magnifica also allows you to load pre-ground (IE shop bought) coffee into the machine should you already have a blend you enjoy. All you need to do is quickly change the settings on the control panel and you’re good to go.

The Bean-To-Cup feature: This was briefly mentioned above and as the name suggests it describes the fact that this machine delivers fresh coffee from freshly ground beans at the press of a button. The coffee is both ground, tamped and extracted automatically from within the coffee maker. The machine forces hot water through the beans at 15-bar pressure to produce a shot (or more!) of espresso.

There are a ton of decent training videos and support tutorials for this product too. So you should always be able to find out any info when you need it. This is handy if, for some reason, you can’t get something to work as you might expect. I have included an example video below:

With so many well thought out features the DeLonghi Magnifica ESAM4200 is must have for any serious coffee aficionado. It does come with moderate price tag, but the sheer convenience regarding the variety of coffees you can produce at home and the level of customization this machine offers (allowing you to seriously fine tune your coffee) it seems like this is a fantastic  investment that smacks of modern convenience and quality. It can also sometimes be found discounted here.