Coffee vs Espresso – What’s the Difference?

Next time you head into your local coffee shop, we would ask you to take a look at the many different drinks on offer. The number is almost dizzying and yet a lot of people don’t know the difference between many of these beverages.

Two of the most common coffee drinks at any cafe are the espresso and the regular coffee, which can be served with or without a dash of milk, depending on your taste. But there is often some confusion between the two but both drinks come from the same source; coffee beans from the coffee plant. However, the way that the beans are brewed is different and this results in espresso being a much more highly concentrated yet smaller quantity drink.

What is the difference between brewed coffee and espresso?

The key difference between a cup of brewed coffee and a shot of espresso is the way that the beans are brewed.

For espresso this involves forcing hot water through the coffee grounds at high speed and pressure. If you purchase an espresso machine, this is a key feature that other types of coffee machine do not benefit from. There are some pour over methods but these aren’t typically favoured and many people would consider an espresso as being the purest form of coffee.

Read: What is the difference between AeroPress coffee and Espresso?

However, another difference between the two is the type of beans that are used. Coffee comes from the coffea plant and while there are several varieties of this plant, the two that are most commonly used for drinking are the Robusta and arabica varieties. However, avoid rubusta beans as they are very bitter.

Traditionally, espresso is made by roasting darker coffee beans, which explains the stronger flavour. This is caused by oil extraction from the beans. What’s more, the beans are roasted for much longer and the result is a slightly sweeter taste. Compared to regular coffee, roasting beans for espresso means that a lot of the acidity is taken out of the coffee.

Once the beans have been roasted, they need to be ground very finely as this ensures they can be correctly tampered in the coffee machine. If they are not tightly packed then the water doesn’t have such a hard time filtering through and the result is a drink that is remarkably similar to a regular cup of coffee.

Is espresso stronger than coffee?

One of the main reasons that people tend to favour espresso over regular coffee is that the darker and longer-roasted beans result in a much stronger taste. This is something else that sets it apart from normal coffee.

However, one thing that a lot of people instantly assume is that, not only is the taste stronger, but the caffeine content is also astronomically higher in a shot of espresso. But what if we told you that wasn’t strictly true?

How much caffeine in espresso vs coffee?

The amount of caffeine that you get in a single shot of espresso or a full cup of regular coffee will very much depend on the quantity within the cup.

Of course, it goes without saying that if you put equal amounts of coffee and espresso into two cups, the espresso would have far more caffeine owing to the fact that it is an overall stronger drink.

But when have you ever known anyone to drink a cup of espresso in the same quantity as a cup of coffee? It just doesn’t happen.

The high concentration of caffeine and flavours would simply be too much and for this reason, espresso is served as a shot.

When you compare the average serving size of a shot of espresso and a cup of coffee, you might be surprised to learn that the cup of coffee is packed with far more caffeine.

There are, of course, many variables but generally speaking, you can expect a regular coffee to have up to 100mg; in some cases, this can skyrocket to 700mg per cup!

In contrast, a single shot of espresso only has around 60mg of caffeine and even those that have been given a caffeine boost would rarely exceed 80mg.

Is espresso better than coffee?

There are tonnes of coffee purists that believe espresso is the only true form of the drink and who will turn their noses up at regular coffee. However, much of this is down to personal choice.

Espresso was originally intended for people who wanted a stronger and more intense coffee drink but for some people this can be far too much.

Must read article: What is a moka pot and how to use it

Moreover, it depends on your mood. There may be times that you fancy the boost that an espresso can give you whereas other times you may want to indulge in a smooth filter coffee with milk.

Is espresso healthier than drip coffee?

One of the greatest benefits of drinking espresso is that it is believed to be much healthier than coffee. If you speak to any doctor about the things that you should cut out of your diet, coffee would be one of the things they recommend cutting back on.

However, that isn’t to say that coffee is unhealthy, if it is drunk in the right quantities. You’d suffer just as much if you drank excessive amounts of water; yes, there is such a thing as water intoxication!

But when you compare espresso and coffee, you will see that espresso is the healthier choice. But this isn’t so much to do with the coffee but what goes into it. Most coffees are served with milk, cream, sugar and syrups. But, espresso is served as is and so there aren’t huge amounts of additional fats and sugars.

However, there is of course a huge caveat here. Shots of espresso provide the base for most frothy coffees. In our milk frother recipes you’ll find the vast majority of beverages have an espresso base of either one or two shots.

While an espresso served ‘straight’ will have less calories than other coffees once you add your frothed milk and other ingredients the caloric and fat content will shoot up. So. Claiming one type of coffee is healthier than another isn’t really sustainable.

Coffee vs espresso in your milk frother

If you’re wondering which is best to use with your milk frother the short answer probably won’t help very much. You can use either.

However, you can make far more varied coffees with espresso. As we mentioned earlier shots of espresso are used as the base for most of the frothy coffees which are popular around the world. Yes, you can use ordinary coffee and some recipes call for that but, if you’re a fan of frothy coffee such as cappuccino, latte, mocha and more, then you should use espresso with your milk frother.

There’s a couple of ways you can make espresso. Either to drink ‘straight’ or, as many of us do, as a base ingredient for frothy coffee.

The first is to use a moka pot. These traditional pots are the way coffee has been brewed since the 1930s. The coffee and water are put into the pot and heated on the hob. If you’re looking for an authentic coffee taste this is the way to do it.

The downside is that it is difficult to achieve genuine espresso because it requires the water to pass through the beans at a high pressure.

This is why it is much easier to use an electric or automatic espresso machine. These machines make genuine espresso because they generate the high pressure required. This is why we always recommend an espresso coffee maker when you are making frothy coffee such as cappuccino. 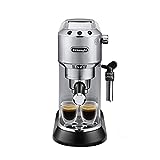 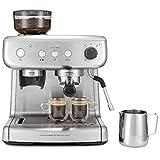 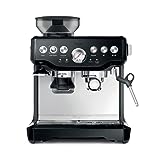 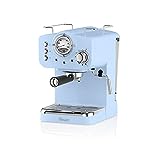 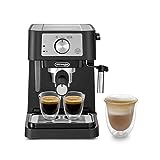 Coffee vs espresso – the final word

If you’re used to heading into your local cafe and ordering the same drink time after time, you’re not alone. But when you look at the choices, there are many and yet most people still order either a regular coffee or an espresso. But what’s the difference?

A regular coffee is brewed in a different way to espresso which relies on high pressure hot water to create a highly concentrated drink. Additionally, the beans are roasted for longer when making espresso resulting in a stronger blend. Milk Frother Recipes – How to make coffee with your milk frother If your electric milk frother isn’t frothing it’s likely you haven’t fitted the whisk correctly or have selected the wrong programme. If you’re using a handheld milk frother and it… The AeroPress is a brilliant coffee maker. But, as with anything, there are always little tips and hints that you can pick up to make it even better.